Unworthy: Warriors of the Bad Fight 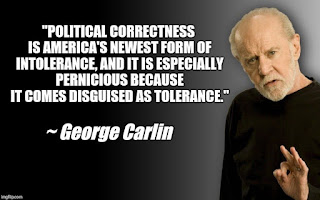 Muhammad Rasheed‏ - "What kind of America is this where I'm the one considered 'wrong' if I call a bunch of defenseless blackies 'n1993rs'? They should thank me for acknowledging them and grin and applaud!"

Joel Comm‏ - Thank you for proving my point. You can’t tell the difference between someone deliberately being mean or vile, and a joke. #smh

Muhammad Rasheed - Was that your point? Because I was merely illustrating the point of the meme quote 'in character' and you seem to have gotten offended by it. I thought we were BOTH joking.

Your triggered reaction leaves me in doubt that you were joking. Explain.

Joel Comm‏ - I wasn’t offended. I think you missed the point completely. Carlin wasn’t talking about being a racist idiot. He was talking about having to watch our speech for fear of what others might say or think. Especially as a comedian.

Muhammad Rasheed - I didn't miss Carlin's point, Joel. The point of my illustrative sketch is that only a very specific demographic of the populace complains about political correctness.

They're the folk whose BEST humor involves the 'n-word' and wearing blackface. Everyone else just adjusted.

Joel Comm - Ah, I see. You went to the ironic extreme by being absurd to make your point. Interesting approach.