"Hate" or a Call for Accountability? 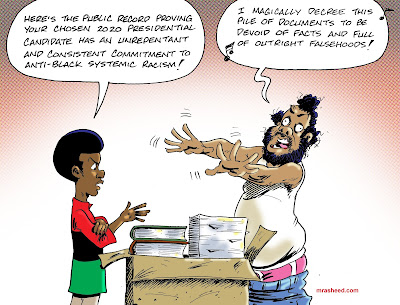 Muhammad Rasheed - If you have a record of throwing Black men in prison with enthusiastic gusto, and you need the Black vote in your bid for the 2020 presidency, why am I considered a "hater" by asking if you have repented of your past deeds and by requiring you to show in your record where you actively worked to reverse the horrendous damage to the Black community with an equal amount of enthusiastic gusto that you used to commit the wrong?

Am I supposed to want you to be my POTUS anyway because you identify as Black? Is this some kind of "Black elitist" colorism thing, where the plan is to overshadow Michelle Obama's legacy only because your clan wished she was lighter-skinned? Do you want to replace the dark 'Aunt Viv' with the light 'Aunt Viv' because you care more about your white supremacist influenced, meritoriously manumitted, skin deep view of "What it look like to white folks" more than you care about the actual quality of service involved?

You need a stronger justification for your Black vote request.

Anonymous - What do you think of the concerns that the possible black 2020 contestants like Cory Booker or Kamala Harris could lock up the race through targeting "their natural voting base" in the early southern primaries, but sacrifice electability in process?

Muhammad Rasheed - I don’t see it as a concern, just a normal and healthy competition. If they both want the spot then they each need to sell themselves to get the loyalty of the voting group they are targeting. The concern wouldn’t be with the political class who operate from the same tried & true playbook when it comes to how they move through the ranks of their circles.

My concern is with the individuals who make up the targeted voting group.

These are the folk who have been deliberately cut off from the political process, from the way government officials function, and how the game is played from a big picture standpoint. The power is with the people UNLESS the people are ignorant, and the American people are more ignorant about the political process than they have ever been and this is by design. The political class protects its interests and lifestyle by closing it off from the eyes of the people, and then feeding the people—through whatever means at hand that work for the purpose—what they want them to think.

The result is that now the people are the gullible dupes of the 1% grifter class, and they are incapable of discerning friend from foe.