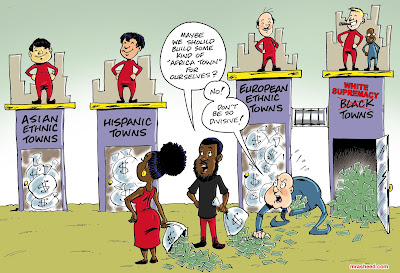 Darryl Wade - No we are not stop trying to spread that BS, when so called blacks did build towns and businesses, the were destroyed by racist white people and the authorities did nothing. Have you heard of black wall St. , The massacre in tusa, rosewood, and other incidents that happen in america. American schools keep these terrorist attacks out of the school books.

Kevin Birge - Most of what goes into the school books is useless. You can add the Great Society and Urban Renewal to the list of scams that got ran.I don't know what the answer is, but I can tell you it isn't more government.

Loron Brazelton - As a white male i have an issue with this picture. One with the bags full of money there's no reason that those two African americans can't build their own towns and business. The problem is that they don't stick together like Asians,Spanish, and European groups. No one can blame that on us white guys. They would have to place blame on themselves. I mean look at you all. Always complaining about Slavery. Yet you can't come together to get your reparation money.LOL It's sad you all would rather argue amongst yourselves and complain than fix your own issues. And if you all would work together actually the time is now to ask and complain about your reparations money while Trump is in office. Since you say he's a racist bigot. What would you all do if he actually paid the money out to you? Sometimes you fight for the wrong reasons. Would kill another one of your own race for $5 or a pair of shoes, drugs etc.. And complain about small time money that's not even worth one persons life. Yet won't even speak up to fight for your million dollars + per african descendant reparations to truly help your own race out.LOL SAD! When are you guys and gals going to realize? Do we have you all that distracted?

Muhammad Rasheed - Loron wrote: “One with the bags full of money there's no reason that those two African americans can't build their own towns and business.”

Systemic racism is all about theft of Black wealth. It plunders the Black community to build up the racist aristocracy of the west, widening the infamous wealth gap by design. During the breaking/seasoning phase of Reconstruction and later into jim crow, it was marked by the destruction of Black businesses and towns by a resentful proto white middle class, that didn’t tone down the barbarity of the lynching era until the wealth gap had increased sufficiently to give whites peace of mind that Blacks weren’t going to rule over them.

Loron wrote: “The problem is that they don't stick together like Asians,Spanish, and European groups.”

This phenomenon happened during the post-civil rights era when the “integrationalist assimilated tokenism” era began. Before that, sticking together in the way you describe is exactly how Black Americans survived, and even thrived, during the heights of both jim crow and as free people during the slavery era.

Loron wrote: “No one can blame that on us white guys. They would have to place blame on themselves.”

Considering I owe the rudimentary freedoms I possess today to the rivers of white pro-slavery blood that flowed during the Civil War, I am forced to agree with you.

Loron wrote: “What would you all do if [Trump] actually paid the [Reparations] money out to you?”

Watch stunned as his own people assassinate him for it on camera as an example to the rest of you.

Loron wrote: “Would kill another one of your own race for $5 or a pair of shoes, drugs etc.”

This is just nonsense partisan political rhetoric here. Criminals among every group are opportunistic by their nature, and obviously the opportunities among the striving poor would fuel the lifestyle of the petty criminal. On the other side of the tracks where the big money flows, the opportunistic criminals create nation-wide and even global Recessions that rock and destroy whole economies. Your habit of treating the criminal element among the Black poor as if they are somehow unusual – vilifying them as the foreign “other” to justify your abuse and plunder – is just the propaganda campaign of the mass incarceration industry.

Loron wrote: “Do we have you all that distracted?”

Yes, and it’s by design. I hope that by decoding that calculated distraction in my art I can aid in waking my people up and making the very changes that you are ranting about here.

Muhammad Rasheed - The current "Ghettos and predominately black citys" [sic] is what's left in the aftermath.
Posted by M. Rasheed at 11:28 PM