Message to the Sunken Place 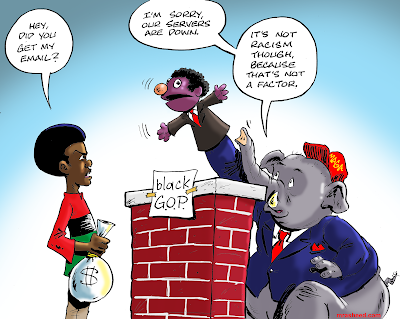 You support an earlier observation of mine, that Blacks have never had a problem building wealth. There were wealthy free Blacks during the very heart of the slavery era. The problem is that were it not for racism, MORE Blacks would be wealthy, and poverty among our communities would actually be rare, but we've been prevented from building legacy wealth over the generations. Our wealth has been continuously siphoned off -- our property STOLEN -- and used to feed the hoarded money bins of the dominant class of our racist aristocracy (which explains where the "lazy" stereotype comes from, as whites encourage you to continue to "work twice as hard as anyone else" since you are supporting your household AND his). When I point this fact out, you keep coming to refute it using your individual success story as the proof that there is no racism, or that it's "not really a big factor." The facts of history demonstrate that you will need something stronger as proof. What do you have?

Throw Down Your Rod!

Just as I Suspected, Paying Rent Is Racist

That was no typo: The median net worth of black Bostonians really is $8

Homes owned by Black Americans are undervalued by billions of dollars

The Case for Reparations

Black Workers Really Do Need to Be Twice as Good

How Toyota May Have Started Overcharging Minority Customers
Posted by M. Rasheed at 4:03 PM