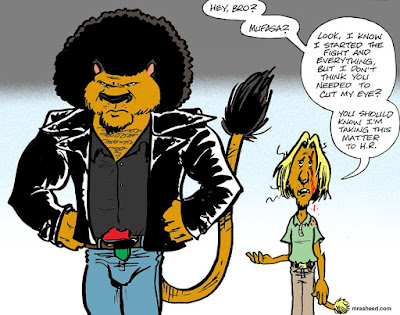 CITATION
Rasheed, Muhammad. "Lion King: The Anatomically Correct Edition." Cartoon. The Official Website of Cartoonist M. Rasheed 18 Aug 2017. Marker w/Adobe Photoshop color.
Muhammad Rasheed - I checked out on the Lion King franchise once I discovered that it's the black-maned lion that is the healthiest and most virile. lol #DisneyBye

ME: "Stop lying to me!!! Stop brainwashing everybody with your Euro-beauty standards!"

Muhammad Rasheed - Just how they were acting during the study was a TRIP.

Carmen Aquino - So.. You did know about Kimba the white lion right? I mean in the spectrum of color Disney went brown on this one. :D

Muhammad Rasheed - The fact that the scrawny, childless lion "on the low end of the gene pool" was given the black mane, while the powerful protagonists had the blondish-reddish-blondish-reddish mane, says everything I need to know.

I ain't Japanese. They have their own issues to work out. lol