Beloved by His True Fans, Sure... But was He Effective? 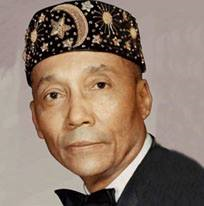 A Customer – [a review of Great Black Leaders: Ancient & Modern by Ivan Van Sertima] I found this book to have a wealth of valuable information about the lives of many black leaders. I for one have come to associate scholarly integrity with Ivan Van Sertima's name, which contributed heavily to buying this book. However I found that impression tarnished by the obvious omission of Elijah Muhammad from this book. I am continually seeing authors make a concerted attempt at writing him out of history, when the Nation of Islam under his charge, is on the history books having impacted Black people around the world very significantly. I could see if Malcolm X, who was included, was responsible for a significant portion of the Nation of Islam's affect on Blacks in America as has been incorrectly perpetuated for the last 15 years or so, but that is not accurate. If Van Sertima is going to group "Black Leaders" together who have impacted blacks, I am baffled as to why he would put leaders such as Hannibal, Shaka Zulu and Kwame Nkrumah and then put a student of a true leader, who, according to the same criteria the above men were chosen, is actually greater in stature. It is equal to omitting Martin Luther King in an effort to over-exaggerate the accomplishments of Jesse Jackson (MLK's student). Many other "so-called scholars" have made their efforts suspect with the same overt attempts. Perhaps if they would leave their emotions and political correctness out of their scholarship, the rest of us would take them seriously.

Steve Messi - Although I agree with you on your point with Helijah Mohamed and I think he should be counted as a leader of the black community, I think the that the impact of Malcom X was way more significant the the limited scope of influence that Elijah had. Wasn't it for Malcom X, the Nation of Islam would have never gained the fame and popularity that it has enjoyed ever since. Elijah was merely a spiritual leader and he should have understood that himself. But deeply, he coveted Malcom X's world popularity and appeal and organized his elimination. That is a chapter of his story that no one can forget and we all regret; and that is why he should be kept outside of the list.

Big Sista Patty - I agree with Stevie. I don't think Elijah Muhammad should have been included. I don't think the average Black American would consider him a great leader. He may be to the people who follow his teachings, but to the masses I don't he's that important. I would have been very upset if I read a book of Mr. Sertima's and he would have been included. Lets be real Elijah isn't on the same level with King & Malcolm. The reviewer obviously is a follower and he is letting his emotions get the best of him.

Craig - Malcolm wouldn't have reached his potential if he never met Bro. Elijah. His teachings are a coat for many colours. And obviously your arrogance has gotten the best of you.

Muhammad Rasheed - Craig, with that logic every great leader's kindergarten teacher should be included on the list as well, hm?

Yusuf - Paul was more responsible for the rise and spread of Christianity then Jesus - but who would dare say that Paul was greater than Jesus. Elijah Muhammad was indeed, probably, the most significant leader of the 20th century. If the adage is true, "you judge a tree by the fruit it bares," then the fruit of the likes of Malcolm X, Muhammad Ali, Louis Farrakhan, Dr. Na'im Akbar and Imam Wallace D. Muhammad, is a great testimony to the place that Elijah Muhammad occupies in world history. He should have been at the top of the list.

Muhammad Rasheed - 1.) Paul spread his own pagan-tainted message, and was the bitter rival of Jesus' hand-picked heir. I certainly wouldn't dare say that the usurper was greater than the Christ.

2.) Your loyalty to him is commendable, but using the criterion of success from your own `fruit bearing tree' quote, what long-term permanent gains have the African-American community achieved based on what Elijah's message and goals were? Are the people he preached to - and their descendants - enjoying the fruits of his vision? Because from here it sounded like a whole bunch of empty talk that profited the community for a only a very short time... just long enough to snap a disappointed follower forcefully awake and become embittered from all the scandals, assassinations, schism drama, mismanagement of funds, etc. The truth of the matter is that his organization peaked under the charisma of another man, who he tore down out of envy... an excellent leadership trait! Elijah sabotaged his own organization during his reign with his own irresponsible foolishness. Where is the independent, economically powerful, thriving African-American community, that is able to sustain itself after Elijah, that upholds his teachings as the foundation of their success? No such a thing exists, which means Elijah was a failed leader.

Yusuf - Elijah Muhammad's legacy will live on by its own merits and the merits of his, aforementioned, pupils - and those of us who are still actively engaged in the work. It seems that you and your ilk are the only ones dead to that fact. Peace!

Muhammad Rasheed - I wouldn't consider it "dead," but instead awake to the fact that there is a greater gap between the economic classes -- the poor African-Americans that the NOI preached to specifically are even more isolated, disenfranchised, and preyed upon by predator socio-political forces than ever before. Therefore, the legacy of both Elijah and his "aforementioned, pupils" has absolutely proved to be great abysmal failures quite at odds with the fruitless claims of your ilk's pompous hype machine.

Yusuf - I gave you names of my "ilk" - give me names of yours and let's compare. Less your're just some lone wolf out there crying in the night - helpless, hopeless - "isolated, disenfranchised, preyed upon" - shattered dreams - "dead". What you got to offer as an alternative? And with a name like Rasheed, you probably owe that to my "ilk's pompous hype machine". Negros just didn't have those kind of names prior to.

Muhammad Rasheed - It's funny that you put the word 'ilk' in quotes when you are the one that used it first.

Give you the names of people that did what? The Lost/Found Nation of Islam in the Wilderness of North America... as well as its numerous offshoot groups including Farrakhan's version of it... made the claim of being the answer to what the poor blacks needed to rise up and claim their true birthright. Every single one of those group's leaders have failed them, including their prototype predecessor Marcus Garvey... whose organization also collapsed over the same type of clumsy mismanagement and ego-fed schisms. Asking me to compile some random names of individually successful blacks is supposed to do what exactly? Distract me with a strawman? A far more relevant challenge is to find the socio-economically successful black community -- that the world courts for their skills and mastery of the Sciences -- who were birthed specifically from the teachings of the proud and over-hyped afrocentric/black nationalist organizations of the last several decades. Because the absence of such means that not a one of those groups' leaders should be on any kind of 'Best of" list. EVER.

Yusuf - "A far more relevant challenge is to find the socio-economically successful black community -- that the world courts for their skills and mastery of the Sciences"
OK, you're on - tell me, show me - who, where?

Yusuf - No brother, I think you have failed those leaders. Except you be dead or have given up all hope - the struggle continues. I have children and grand-children and am honored to point to a generation of exceptional men and women who got us this far "up from slavery." And from where I sit, having aligned myself with our "Great Black Leaders: Ancient and Modern" - the future looks bright. Whether the vision is realized with my grand or great grand children - when they look back and pour libations to the ancestors and give thanks - my only point is that The Honorable Elijah Muhammad receives his due. Nuff said. You are a very intelligent, articulate, and insightful brother - use it to construct, instruct, and inspire - and we'll have that socio-economic reality that seems to be a recurring theme in your posts. Selah!

Muhammad Rasheed - Here's the thing: In order for our people to achieve what we need to achieve, we'll need to see what went wrong in the past from the previous efforts. That step will require an objective, candid, and courageous study into the groups, organizations, and events that make up our rich and often disappointingly painful history. Setting folks up on pedestals who fell FAR short of the glory they were absolutely capable of will not help us. Only the truth will help us. "This person failed because of XYZ. Let us not do XYZ, and in fact, have a zero tolerance for it." That's the approach we need to start taking, so that the next pro-black organizations that form will have a better chance of success. The past is full of broken promises, embarrassments, and the ruins of what could-have-beens, but it is also full of material to learn and grow from. You can only be great by building up from the mistakes from yesterday; you're not going to become great by worshiping the past and ignoring the mistakes as if they weren't real.

Yusuf - Here's one more thing, "so that the next pro-black organizations that form will have a better chance of success," that is, knowing your competitor's play book. For that I would refer you to Wikipedia - search - "Cointelpro". And while you're here on Amazon, you may want to pick up, "Confession of a Economic Hit Man". Overcome these obstacles and you'll have a great chance of success - fail, and you too will join the ranks of your other failed leaders and organizations who tried. "Judge not, less ye be judged." Good luck to you!

Muhammad Rasheed - I'm already familiar with COINTELPRO and other attacks of the enemy, like the kidnapping of our leaders on false charges and shuffling them through the prison system, usually after filling them full of drugs. Naturally that, and basic levels of racism, are important obstacles to overcome, but if we don't solve the traditional problems that kept our previous organizations from rising to their potential and sustaining it, like basic business organization, and ego-fed despotism, we only make the destructive efforts of our enemies easy for them. Let's at least give them a FIGHT before we slit our own throats.