The Most Conspicuously Untreated Psychosis


CITATION
Rasheed, Muhammad. "The Most Conspicuously Untreated Psychosis." Cartoon. The Official Website of Cartoonist M. Rasheed 01 Jan 2022. Pen & ink w/Adobe Photoshop color.
CLICK & SUBSCRIBE below for the Artist's Description of this #MRasheedCartoons image:
M. Rasheed on YouTube!
M. Rasheed on BitChute!
*****************************
Q: Why is murder and enslavement morally and ethically wrong?
Mark T Loy - The premise of your question depends on the existence of an objective moral standard.
If no objective moral standard exists, then the proposition: “Murder and enslavement are morally and ethically wrong” is not absolutely true.
Let’s ask the question “Was slavery morally wrong in 1825?”
We would certainly say “YES”!
However, Americans who lived in the southern USA would:
Who is wrong here? Us or them?
You could say “morality is a sliding scale. It was ok back then but it’s not ok now”
However, this opens the possibility of slavery being OK in the future.
Also, slavery is still practiced today in countries other than the USA. Therefore the notion that “slavery is morally wrong” is not necessarily universal.
So if you believe that morality is objective, you’re tasked with finding an objective foundation for this morality.
If it is a deity, you assume the burden of proof to demonstrate/argue their existence.
If it is evolution, then you are tasked with coming up with a viable model of how an “is” gave rise to an “ought to be”.
Both of these views are extremely problematic.
Muhammad Rasheed - Mark wrote: “However, Americans who lived in the southern USA would […] Who is wrong here? Us or them?”
The national argument around slavery as driven by the Abolitionist Movement specifically conflicted the slave holder class through their religion. The latter countered by fabricating elaborate justifications for why it was okay to continue to enrich themselves through the free slave labor economy in “the land of the free.” They were demonstrably in the wrong and knew it, but deliberately decided to err on the side of the accumulation of obscene wealth hoards. 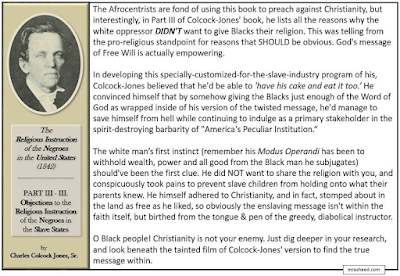