Classic Games of the White Supremacists

Elig Mmbv - Stop leeching off of African culture for your art ! Stick to ADOS ! Keep the same energy !

Muhammad Rasheed - Tell your African immigrants to stop leeching off ADOS once they show up here and we'll have a deal. :)

Elig Mmbv - Nope you for the longest ! Yall aint shit without Africa yall aint shit ! And niggas dont own shit in America to begin with for anybody to leech off of !

Muhammad Rasheed - Africa abandoned me for 400 yrs while you allowed the diabolical fiend to destabilize your nations so he could take your resources without paying market prices. Every other post I witness Africans praying to giant statues of white jesus, allowing drunken white "missionaries" to punch you in the face without penalty and even allow the red Chinese to abuse you at will in your own land, while you pretend to be superior over me.

We are, in fact, in the same boat with a mutual enemy exploiting the entire Black Diaspora while you allow him to puppeteer you into attacking me for no other reason than because I wish to empower myself out of the USA's bottom caste. You need to turn your fury in the direction it's supposed to be turned in, bud.

you were asked to return to Liberia your coon asses prefered oppression so foh with that BS ! you got the wrong one tariq aint here to save you

Muhammad Rasheed - "Liberia" was a colony of the USA invented by president Monroe. It was yet another white supremacist scheme. Will you EVER tire of taking white peoples' words at face value? Please grow up.

Elig Mmbv - M. Rasheed wrote: "'Liberia' was a colony of the USA invented by president Monroe."

Still was in Africa but coons wanted to stay with white daddy !

Muhammad Rasheed - There are hoards of white slave traders in Africa right now, the descendants of the original Dutch and Spanish traders, currently running amok and keeping you unstable even as we type. We are literally in the same boat whichever land we tread upon, it is all one, since white supremacy is a global blight.

Will you continue to do the bidding of the whites and war against me, or will you join ADOS as your brother/sister and help us fight this thing and free us all from this evil once & for all? What say thee?

Muhammad Rasheed - lol Your business IS my business, as mine is yours. We cannot stop the White Supremacist Ideology if we don't do it together, Elig.

Elig Mmbv - Fuck no ! Yall made it clear from the beginning of the ADOS BS ! there is no turning back ! Trust me we ve seen everybody who was on that train ! We just decided to remain silent ! But the moment we see one of yall on the continent ,the caraib or anywhere there are other black people or trying to join any panafrican movement yall going to see the result of what youve created ! Ask tariq !

Muhammad Rasheed - Elig wrote: "Trust me we ve seen everybody who was on that train !"

You believe ADOS attempting to enfranchise and empower ourselves so that rival groups can no longer take advantage of our weaknesses is an attack against you. Once again you are taking the white man at his word and uncritically listening to him when you absolutely should not. This is the root cause of the issue. Stop allowing yourself to be played like a fiddle, please. It is embarrassing to watch. 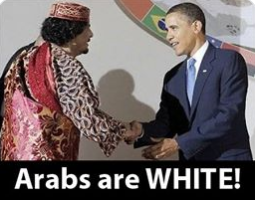 Vitaly Lesin - No one black Muslim president has expressed his protest against modern slavery in Mauritania, Libya and other Arabic countries, where black male slaves are beaten and black female slaves are raped and even organs are removed for transplantation. No one black Muslim president protested when Fulani killed 300 Nigerian Christians. But now they are very concerned about the fate of white Rahinjas in Muanmar. This shows to all of us, that Islam is an EXTREMELY harmful religion for black Africans, because it divides the black race into friends and enemies, with brothers and sisters becoming enemies (by race).

Muhammad Rasheed - This is you? Your name is Russian, huh?

Why are you in the Gambia? To do WHAT??? 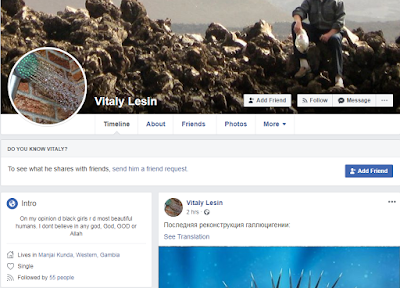 Why are you soliciting for Black women? For what? It should be clear to everyone with at least half a brain that these legions of whites who are literally the direct descendants of the original Trans-Atlantic Slave Traders are the ones continuing their dirty work of old and using the signature false flag of naming the international operation "Arab Slave Trade" to misdirect attention from the true fiends involved. #NoNewTricks