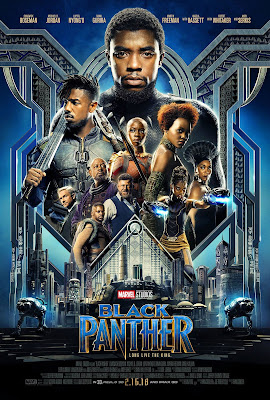 Muhammad Rasheed - Back during the golden age of the HeroTalk message boards for the Museum of Black Superheroes, it seemed like every other newly-created thread in the main forum was about the Marvel Comics character Black Panther. In my memory it seemed like the vast majority of those were fanboy movie speculation fantasies, including casting calls. Echoing the most pessimistic naysayers around Candidate Barack Obama’s ambitious chances at the White House, I also remember that nobody thought a BP movie would ever happen in our lifetimes. Certainly not one that would have been worth a damn.

I just saw Ryan Coogler’s film and it blew me away. Even though I wasn’t one of those who felt the movie would NEVER get made, I absolutely thought that if it did, it would look more like the original comic… like Tarzan would have to make an obligatory guest appearance or something similar, complete with the grass skirts, huts, bones-thru-noses and et cetera of the original comic book depictions. I was very pleased to see a Black Panther movie that was far more impressive than what the old HeroTalk members even dared to hope for, with it being an amazing big budgeted, silver screen introduction to high-level Afrofuturism and what it could mean in the future for Black creators and Black genre works. 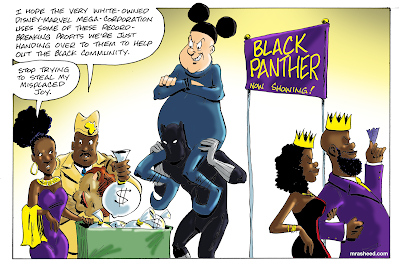 
Muhammad Rasheed - Well, it looks like Hollywood has finally managed to kickstart a new Blaxploitation era.  The original one from the '70s was apparently very lucrative for them otherwise they wouldn't do it, but now after several efforts ranging from the lazy/bare minimum, to the pull-out-all-the-stops Oscar nominee, it looks like they've finally done it again.

What may enable the new Black Panther film to really take off and launch a series of heavily exploitative copycats when so many previous attempts had failed, is that Disney-Marvel handed the white-owned property to an enthusiastic group of pro-Black Black people and just let them drive. The impressive result is that it gives the illusion that this is a "Black Movie" that will empower Black people.

Of course it's not, and it won't. Despite allowing Blacks to lovingly craft it themselves, the property is white-owned, and all the record-breaking, economy-twisting money Blacks will hand over to one of the Hollywood cartel's tentacles will do absolutely nothing for them. It will be very entertaining and fun though. I wish instead that they used that money to fuel their very own Black film industry and make themselves a Black-owned product with the same buzz they gave this one, which they could have done at any time. It's not too late for that, of course, but I wish they would wake up to that sooner rather than later. Disney-Marvel does not deserve this from Black people. Blacks deserve to give it to themselves, and I wish they would. It's time to compete against Hollywood instead of rewarding them for their scraps.

My prediction is based on the previous blaxploitation periods and how they played out, so I will expect some dedicated and brilliant efforts by business-savvy Blacks to capitalize on Black Panther's success, efforts that are eventually overtaken and smothered by thousands and thousands of "Black superhero" cheap knock-offs by deep-pocketed white film makers. The latter will lack the Black empowerment message the community needs, but will instead return to type and be full of the classic 'whiteness' message in the usual fashion. The result will be that the average Black person will rarely see the pro-Black diamonds because they will be overwhelmed by all the exploitative crap, causing Blacks to quickly get tired of of the new 'film genre.' Then all it will take is one major, white studio flop and Hollywood will declare that the age of the Black Superhero film is dead, and they will refuse to finance another. Then we will return to the pre-Black Panther era of wishing there were better Black representations in film.

The solution and best case alternative to re-playing this tired blaxploitation model over and over and over again is for Blacks to do it themselves and support their efforts. Use your talents for your own products, spend your good money on the Black businesses the way Coogler did, and spend your disposable wealth and investment seed on building up a Black entertainment empire. Tell your favorite Black creators what you want to see in formal proposals, get the crowd sourced funds together to pay them to make them. Create your own brand new safe spaces and stop waiting & paying for bigoted whites to do it for you.  Build up your own, and once you do it and are well established in your own mighty Black film industry (or any other industry), then you should collaborate with white businesses and do big crossovers that are lucrative and financially fair to all parties involved.

Please wake up to the fact that the "Integration Era" has never served you and was a white supremacist scam from the very beginning. Your original goal was "desegregation" and involved removing the barriers that prevented your interconnected Black businesses from increasing in wealth and political power through Economic Inclusion into the mainstream. This would have involved Black people being truly equal and free as full citizens of the USA, competing on equal footing with the other ethnic groups you shared the nation with, including the descendants of the former slave owners. The only thing keeping you from being in that place now is YOU. Please rise up and take your rightful spot in this land you helped build.
________________________________
MEDIUM: Scanned pen & ink cartoon drawing w/Adobe Photoshop color.
SUBSCRIBE and receive a FREE! Weapon of the People eBook by M. Rasheed!