The Coward's Game of 'Respectability Politics' 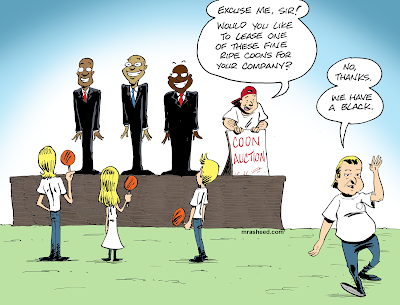 I think it ultimately boils down to a high-level form of cooning, which is itself a pathetic and cowardly acknowledgement that “white people won, y’all” and we should just accept it and make the best of our lives well inside of the lines whites have arbitrarily drawn for us.

Respectability politics is basically a contest between coons, as they try to outdo each other in acting the way they think whites want them to act, dressing the way they think whites want them to dress, and promoting the ideologies they think that whites prefer them to promote, so that if they do a great job, whites will choose them to be that company’s “token black.” The ultimate goal is to have the most racist whites say, “Now THAT’S a black that I wouldn’t mind voting for!”

The practitioners of respectability politics earnestly believe that whites are crazy and that they will never stop exploiting us, but they think Blacks may experience less foulness and abuse from whites if we all agree to coon in this way. These Blacks think that ‘racism’ is our fault for angrily responding to racist actions of whites instead of just “forgiving” whites of their never-ending abuses and letting it go. They don’t believe Blacks should spend any effort in activism, or otherwise making whites feel uncomfortable, because it may make the respectability politics track more difficult as whites will just get defensive and angry and now they don’t want ANY Blacks in their company. This frustrates the high-level coon, and ironically makes them feel like it's the activists who are regressive in the race relations game.

Muhammad Rasheed - @Gil... Well, I did toss a blue tie in there to show that it wasn't an exclusively partisan item. Even though Black Republicans do tend to be the most ridiculously caricatured in this role, it is a Black politician thing almost across the board. Conspicuously, there's no "African-American Political Agenda" to hold the Black politician class accountable, so they are forced to align themselves to the platform of interests other than that of their own ethnic group in order to have a career. Consequently, the Black politician tends to be a sell-out figure by default, and will continue to be one (with one notable exception) until the Black community as a whole becomes more politically savvy and learns to get their elected officials in line using their vote and economic force.

I don't see what that political talking point has to do with the topic, but you have raised an interesting concept I'd never thought about before. The idea that, as a reward for becoming a willing support class under whites in the GOP, Blacks will receive a respite from the 1%'s never-ending war against the Black Family and some token of material success within the conservative machine. That's certainly worth exploring in the data. Thanks, Gil.

Gil Harris - Not sure if you're having a sincere discussion or not---but I'll give you the benefit of the doubt. You said. ".........The idea that, as a reward for becoming a willing support class under whites in the GOP, Blacks will receive a respite from the never-ending war against the Black Family...." both clauses are truth deprived---but the "never ending war against the black family?" puleeeeeze--- How about some black responsibility for the demise of the black family?

Muhammad Rasheed - The respite from that attack was my own speculation based on you oddly tossing in that "intact family" thing when it had nothing to do with the topic of discussion. I figured you were letting something slip you weren't supposed to be admitting to while thinking you were being clever about it. Now that you've been called out, I wouldn't expect you to tell the truth now anyway, so we may as well let that go. lol

The war against the Black Family is very real, as documented in Moynihan's infamous report. Plus it's a no-brainer based on what it's designed to do, and who traditionally profits from stuff like that.
Posted by M. Rasheed at 10:29 PM