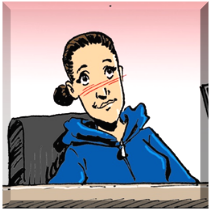 In early June of 1997, in what now seems like a forever ago, I remember actively solving a problem. In my first, humble but official ‘art job’ after college I found myself struggling to capture the likeness of beautiful women.

As a new Kaman’s Art Shoppes caricature artist working at Cedar Point Amusement park in Sandusky, Ohio, I had already completed the 2-week orientation/training, and was actually doing pretty well pulling customers and getting back positive feedback. Except for that one thing:

“Oh, I’m not paying for that. You weren’t even looking at me.”

My issue was that I would go into a google-eyed, quasi-drooling daze whenever a beautiful woman would sit in my customer seat, like I was a sex-starved nerd in one of those teen exploitation movies like Porkies, or American Pie. Naturally this would prevent me from focusing in on the technical structure of the face necessary for achieving anything like the “likeness” needed for a successful cartoon portrait. It was also causing a significant blow to my artistic ego.

Fortunately there was an easy fix. All I had to do was draw a lot of beautiful women until I would get used to the feeling, and eventually get past the stomach butterflies or whatever. Or better yet, target one particular beautiful woman and convince her to allow me to draw her a million times until I’d worked pass the artist’s block.

I knew just the one I wanted to ask.

Kaman’s Art Shoppes kept us in the park in company-provided housing. The dormitory I stayed in (the name of it has long since left me), had a security desk that required all who entered to scan in their employee identification card. Often manning the desk during the night shift, there was this gorgeous young woman who always took my breath away. She kept her hair in a small, ponytail/bun, was around 5’ 6”, had this smoldering, almond-eyed stare when she was annoyed, and also had the reputation as “The Mean Girl.”

I had borne witness to this so-called “mean” once or twice before. So I was not intimidated by THAT part. I had “mean” people in my circles after-all, and they have always been nice and reasonable people if you weren’t messing up their work areas and stuff. Once when tasked to keep order during the obligatory fire drill, she was extremely no-nonsense, and refused to allow tomfoolery and shenanigans on HER watch. With her arms folded and eyes flashing, she generously dispensed razor sharp retorts and humbling sarcasm to all who supplied dumb questions and pushback. I watched fascinated, and noted that though she was obviously irritated, she still kept her composure, and successfully met mission. Another time there was an unusually long line of people coming into the dorm (or maybe it was just my first time experiencing the evening rush…?) and she was one of two desk security staff making sure all those ID badges got scanned. The line was moving quickly, and I found myself straining to catch her name on her own badge…

Oops! That was me. I handed her my badge and smiled at her. She smiled back and her eyes softened. I knew then that she wasn’t mean; that’s just what the immature and lazy called people who took their jobs seriously (“Cmon, man! Loosen UP! Let me get away with XYZ just this once.”).

One day, I got up determined to ask her to be my training partner to help me work out this problem. I grabbed a pencil, my trusty sketchbook, and made my way to the lobby. On the way to the front desk I chickened out, and decided to sit off to the side and sketch her in a perfect imitation of a serial caricaturist stalker creep. Fortunately, this cowardly scheme failed, as she was too far away to get the details of her face I needed for any serious drawings, and I caught her eye often enough to regain the courage I had when I first got out of bed.

Alright. I walked over to the front desk to catch her in mid-comedic banter with Tom, her co-nightshift security partner. They responded to my “Hi,” and then neatly folded me into their banter, each jokingly asking me to ‘Amen’ their quick-witted ribbing of the other. I took advantage of the moment to enjoy her in a relaxed state, flashing her gorgeous smile while the two of them simultaneously played “Go Fish!” with a deck of Tom’s novelty cards. During a break in their dialogue, I formerly introduced myself, and finally got her name.

Was a prettier name ever uttered? I doubt it. Not in THAT moment, surely.

Amused, Katina listened to my spiel, and agreed to allow me to sketch her. Her composure changed noticeably, as she took on what I imagine she considered her “model look.” Complete with a ‘bedroom eyes’ accessory, she did a great job in my humble opinion. Whatever little rudimentary crush I had developed by that time was now a raging fire of head-over-heels super crush. 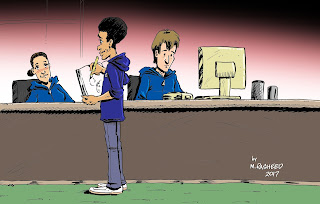 I drew several sketches of her over about 12 pages in the next hour. She provided the same disappointed feedback of my previous beautiful victims, and I had to remind her of the whole reason for this late night drawing assignment in the first place. She conceded with a smile and an apology, and then a remarkable thing happened. We spent the next three hours of her shift talking… wait, was it just “talking?” No. We CONJURED up a magical friendship that lasted until the end of her life. That night I was so inspired by her intelligence, the expressed assurance of career plans for her future, and everything about her. It was obvious to me that on that night, I was in the presence of true greatness. As I became her closest confidant all the way until 2009, when circumstances necessarily required boundaries on our precious friendship, I genuinely looked forward to seeing her in her fully-realized state of awesome. I wasn’t the only one who felt that way about Katina, as she shared the details of the praise her other dear friends heaped upon her, especially her Slippery Rock University alma mater crew.

In the end though, I’m not sure she really felt that way about herself.

We lost Katina Maria Clayborn suddenly to breast cancer on 14 May 2017 at only 43 years old. It is a terrible and very sad thing.

Beyond the pain of her death, there was also the pain of witnessing her beat up on herself, and paralyze herself into inactivity based on a desperate over-analysis of her plans. She spent the majority of her adult life fretting and pessimistic, in shocking contrast to the confident and self-assured superstar I met at Cedar Point. Perhaps she was TOO good at selling people on her talents and capabilities, to the point that our expectations of her had become a form of idolatry? If so, then this was of course a situation that she could not possibly live up to, which quickly broke her from the supernatural pressure.

I truly loved Katina Clayborn with all my heart – and in addition to many other things – I wish she could have lived the life she wanted to live in her ultimate vision before she passed away. Her story is a lesson for us all. Fretting, second guessing oneself, not taking chances based on what MIGHT happen, etc., isn't worth playing with since none of us is promised tomorrow. Go hard and burn bright while we are here. Otherwise, what are we doing? Fear is just a tool, not a road block.

Rest in peace, my beloved “Babyhead.” May God have mercy upon your sweet soul.

Your friend for eternity,

Muhammad Rasheed
Posted by M. Rasheed at 2:24 AM