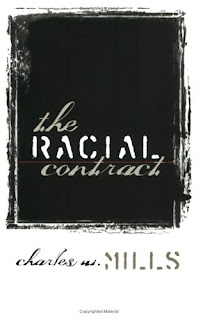 I’m a big fan of a few authors whose great work involves making sense of the massive stockpile of collected historical data by spotlighting the logic thread that connects chunks of it into potent influential viewpoints. The Racial Contract by Charles Mills is the one that rules them all, with the author revealing the foundational support structure upon which all Western philosophy and formal moral ethics theory is based. Pointedly, Mills reminds us that Immanuel Kant thought I was a subhuman, and he is the most important moral theorist in all of western thought. If you can imagine the movie The Matrix, this book functions like a “what the Matrix is, how it functions the way it does, and how we can free ourselves from it” bible. It's intended to be the long missing component of Western Philosophy, a topic which can never be fully understood without seeing it properly through the lens of 'whites-exploiting-nonwhites' that it was created from in the first place.

The world is the way it is today directly because of the global domination of the Europeans conquering, colonializing, and enslavement of non-Europeans under a White Supremacist banner (originally Christian, but it quickly morphed away from that, since the exploited could always just convert their way out of exploitation, losing the conqueror potential revenue, and we can't have THAT). This “White Peril” savagely plagued every nation on earth and took two forms:

1) the initial physical assault of the European war machine designed to break, “season,” and smash the nonwhites into a submissive state ripe for exploitation

2) the ideological indoctrination of that submissive state on the mental level.

For the former, Mills was kind enough to coldly, clinically, chillingly, remind us of certain devastating examples, and even pull others from the deep dark of centuries past. In the latter – the era we are currently in – he deftly points out the many, many examples of how the breaking has become fully part of our cultural identity, as the conqueror so wished. But the effects of chattel enslavement, jim crow, and institutional disenfranchisement upon the exploited classes are well known to students of Western history from that distressed viewpoint.

What was far more interesting to me was how these diabolical practices affected the oppressor himself. One of the perks of being the signatory of the Racial Contract is a deliberately imposed veil of ignorance, enabling one to pretend that the vast atrocities that make up the skeletal structure of Western Civilization never happened, or "weren't THAT bad," with the gross societal imbalances being natural or genetic in origin as the official stance supported by all influential Eurocentric institutions. This personally went a LONG way towards understanding certain behaviors, like why they get mad whenever their historical wrongs are brought up and act as if it is somehow unfair, why they think the weird term “playing the race card” is a legitimate tool of argument, why they get instantly defensive whenever they hear members of the exploited classes celebrating and affirming their own skills, talents & worth, and even why they feel that the current state of a broken exploited people is the way they’ve always been.

Most of all, The Racial Contract showed how we will never finally overcome racism while the proposed solution from the conqueror class is for the exploited to simply shut up talking about it and accept the state its members find themselves in, as lesser persons requiring the conqueror’s merciful, legitimizing gaze to allow them into the ‘club’ of favor. Of course to continue in this state is unacceptable, but the only way it can be reversed is for that side to willingly set aside its ill-gotten artificial privileges and, as J.A. Rogers would say, transform “from superman to man.” In order to do this he must confront himself, recognize who he is, what he has done, and want to self-correct. He will have to go through pain to purge himself of the mantle of “Whiteness,” the political ideology of White Supremacy that he built this Eurocentric Society upon. And realistically why would he do that? He's oft demonstrated that he would much rather create a fantasyland Whitopia and live there than deal with the truth of the reality he created. Mills’ book shows us how truly difficult curing our society of its Greatest Disease will be.
Posted by M. Rasheed at 12:32 PM