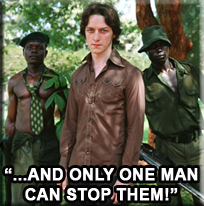 Muhammad Rasheed - The black Forest Whitaker/Denzel Washington/Samuel L. Jackson is the most evil man in the universe and only the white Ethan Hawke/James McAvoy/Robert Forster can stop him. This template seems an easy way to get an Oscar nomination... in fact two of the above won. That's a very powerful message Hollywood wants to pump into the national psyche. I wonder if there's a link as to why a group of white police officers would empty their pistols into an unarmed black man.. reload... then empty them again, seemingly every two weeks or so.

The Academy Awards 'Oscar' is the most prestigious award, the film industry's highest honor. Even Chris Rock joked that nobody watches the award ceremony, but does that mean the title "Academy Award Winning Film" doesn't carry any weight? Who among us follows who gets the Nobel Peace Prize? I sure don't. But does that mean it doesn't have high honor attached? When a very specific type of movie template consistently gets nominated for the highest award in the land, that is a very definite and distinct message radiating out toward the rest of the country that does affect people's attitudes and beliefs and prejudices to some degree or another. Remember when The Cosby Show first came out and the main critique against it was that "black people weren't really like that?" That nonsense comes DIRECTLY from stuff just like this; when the highest award in the land is consistently given to projects that showcase a very specific image of a particular people to the world... a very specific message. These very distinguished judges on that panel are giving that image of my people their Official Stamp of Approval, and from a group like that, it does matter to the people of this nation whether we watch that award show or not.
Posted by M. Rasheed at 7:09 PM