GOP Profits vs Your Health 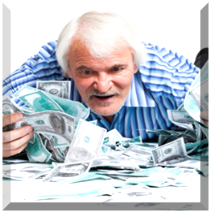 Ted Rall - If Dems had brains or cared about us, now would be the time to push for single-payer, aka actual human healthcare.

Muhammad Rasheed - How come the GOP isn't pushing for it if it is actually good for the US citizenry?   :S

Barbara Cummings - What ever has the GOP pushed that is good for the country? Did you see how many of them rely on big $$$$$$ from insurance companies?

Muhammad Rasheed - i was being rhetorical. lol

Chris Fick - Obama promised us Single-Payer in 2008 but he lied and gave the insurance companies everything they wanted. The Democrats are fascist and Globalist and therefore useless to the American people.

Muhammad Rasheed - The insurance companies had what they wanted already... a cartel of super-powerful insurance companies in bed with the gov that monopolized the system for themselves. Obamacare broke up that cartel and opened the markets, which is why the GOP billionaire class hate it and Barack Obama.

Sammi Mattock - @Muhammad Rasheed... Dude, what are you smoking?

Muhammad Rasheed - The open markets of the traditional capitalist system don't benefit the wealthy; they don't become billionaires in a free and open system of competition, but only by hoarding wealth & power in a closed system they monopolize. This is Economics 101.

Muhammad Rasheed - Obviously 'single payer' isn't an option for the GOP since it would provide the maximum benefit to the average citizen, which by default means it would be the least profitable to the wealthy. Instead of being locked in an unmovable wrestling match with his rivals futilely trying to get a 'single payer' healthcare system passed, Obama then went for a more realistic Plan B system. And the GOP STILL hated both it and him.

Chris Fick - @Muhammad Rasheed... You clearly don't understand the depth of wealth concentraction and monopolize that already exist in that industry. Just looking how the stocks of the insurance companies reacted to the passage of ObamaCare (ACA). If you respond with another stupid Muslim comment I'm blocking you.

Muhammad Rasheed - What?  What did anything I wrote above have to do with Islamic topics?

[Chris Fick has now blocked me from viewing his thread]