Stepping Up to the Challenges of Man-Building Duty 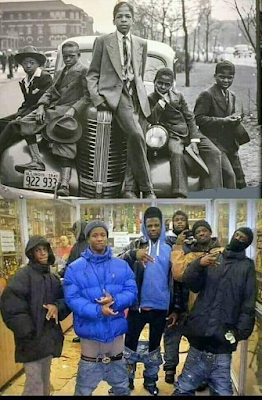 Denise Johnson - That second photo is ridiculous! These young men think it looks good but they look like clowns. I guess they have not learned what this signals in prison.

Muhammad Rasheed - @Denise... Did they invent the style, or was it beamed at them from corporate-owned mass media to influence their buying habits?

Denise Johnson - @Muhammad... I'm not sure but these young men wanted the attention.

Muhammad Rasheed - Most young men want attention. It's in mega-corporate's interest to weaponize that trait against them.

Muhammad Rasheed - Blaming them for being preyed upon by powerful business and political interests doesn't seem to be the best move...

Jeff Mickens - @Muhammad... I agree with you on this one

Muhammad Rasheed - @Jeff... The point of unifying as a political interest group is to protect one another from outsider attacks & exploitation, not join in on the attacks against ourselves.

It's best not to parrot the rhetoric of our foes about us.

Denise Johnson - @Muhammad... I agree but in the photo of a prior generation, the young men were taught by the black men in the community how to be appropriate in their mannerisms and dress. This was in the face of severe adversity. Where is the protection for one another in this circumstance? We know our communities are constantly attacked and exploited but why were other males not communicating the degradation of this so called fashion style to the young men in the community? The corporations and media are at blame but not as much as the fathers and other black males in the community who appear to be absent in influencing the younger generations.

Muhammad Rasheed - Denise wrote: "the young men were taught by the black men in the community how to be appropriate in their mannerisms and dress."

Very true. The difference is that the young men in the above photo are the children of mass incarcerate victims of Biden's 1994 Crime Bill. They are the fatherless fruit of an active attack by the U.S. government to fund Reagan's Contra Wars.

That means we have to try many times harder to raise the type of men our community needs than the previous generation did, because our people are war torn.

Denise Johnson - Then we need to try harder. No males in my family would even consider dressing like this. Black men need to let younger generations know how inappropriate this is. This is something the men need to do.