Islam’s Destruction of the Great Library of Alexandria 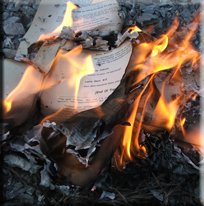 What happened to the Royal Library of Alexandria? We can be certain it was there once, founded by Ptolomy II Soter, and we can be equally certain it is not there now. It formed part of the Museum which was located in the Bruchion or palace quarter of the city of Alexandria. This great ancient city, occupying a spit of land on the shore of the Mediterranean Sea, had been founded by Alexander the Great in his flying visit to Egypt and became the capital of the last dynasty of Pharaohs descended from Alexander's general Ptolemy. The Great or more properly Royal Library formed a part of the Museum but whether or not it was a separate building is unclear.

Stories about its demise have been circulating for centuries and date back to at least the first century AD. These stories continue to be told and embellished today by those who wish to make a moral attack against the alleged vandals. We find that three parties are blamed for the destruction and they correspond to the three occupying powers that ruled Alexandria after it had been lost by the Greeks. Let me first tell those stories as we hear them today - without references, largely inaccurate and used as polemic.

The suspects respectively are a Roman, a Christian and a Moslem - Julius Caesar, Patriarch Theophilus of Alexandria and Caliph Omar of Damascus. It is clear that the Royal Library could not have been burnt down or otherwise destroyed by all three of these characters and so we find we have too many sources for the event of the destruction rather than a paucity. As scholars of the Gospels will vouch, this too can be an embarrassment. How we decide to reconcile the stories will depend almost entirely on how we criticise the sources and which of them we choose to consider most reliable.

One of the most famous myths about the Great Library is that of it being burnt down on the instructions of the Caliph Omar after Alexandria had been captured by the Arabs. The story was best known in Europe due to the translation of George Bar Hebraeus’s Chronology but was successfully debunked by Edward Gibbon.First the legendary account:

"The Moslems invaded Egypt during the seventh century as their fanaticism carried them on conquests that would take form an empire stretching from Spain to India. There was not much of a struggle in Egypt and the locals found the rule of the Caliph to be more tolerant than that of the Byzantines before them. However, when a Christian called John informed the local Arab general that there existed in Alexandria a great Library preserving all the knowledge in the world he was perturbed. Eventually he sent word to Mecca where Caliph Omar ordered that all the books in the library should be destroyed because, as he said "they will either contradict the Koran, in which case they are heresy, or they will agree with it, so they are superfluous." Therefore, the books and scrolls were taken out of the library and distributed as fuel to the many bathhouses of the city. So enormous was the volume of literature that it took six months for it all to be burnt to ashes heating the saunas of the conquerors."

The leader of the Moslem forces that took Egypt in 640AD was called 'Amr and it was he who was supposed to have asked Omar what to do about the fabled library that he found himself in control of.

There are only a few sources that we need to examine. They are very late. The first of the two late sources dates from the 12th century and is written by Abd al Latif (died 1231) who, in his Account of Egypt while describing Alexandria, mentions of the ruins of the Serapeum. The problems with this as historical evidence are enormous and insurmountable. He admits that the source of his information was rumour and the fantasy about Aristotle does not bode well for the veracity of the rest of the piece.

In the thirteenth century the great Jacobite Christian Bishop Gregory Bar Hebraeus (died 1286), called Abal Faraj in Arabic, fleshes the story out and includes the famous epigram about the Koran. Again there is no clue as to where he found the story but it seems to have been one doing the rounds among Christians living under the dominion of the Moslems. Gregory is happy to record plenty of far-fetched tales about omens and monstrosities so we must treat this story with the greatest suspicion. As it is not even included in the original version of his history but only in the Arabic version that he translated and abridged himself very late in life, he may not have known the story when he first put pen to parchment. In The Vanished Library, Canfora mentions a Syriac manuscript published in Paris at the end of the nineteenth century by FranÃ§ois Nau. It was written by a Christian monk in the ninth century and details the conversation between John and Caliph Omar. After help from email correspondents, I have finally been able to find this elusive document in its French translation and ascertained that it makes no mention of any library and appears to be an example of a theological dialogue between two representative individuals. In other words it is not historical and has no pretensions to be.

The verdict on Omar

The errors in the sources are obvious and the story itself is almost wholly incredible. In the first place, Gregory Bar Hebraeus represents the Christian in his story as being one John of Byzantium and that John was certainly dead by the time of the Moslem invasion of Egypt. Also, the prospect of the library taking six months to burn is simply fantastic and just the sort of exaggeration one might expect to find in Arab legends such as the Arabian Nights. However Alfred Butler's famous observation that the books of the library were made of vellum which does not burn is not true. The very late dates of the source material are also suspect as there is no hint of this atrocity in any early literature - even in the Coptic Christian chronicle of John of Nikiou (died after 640AD) who detailed the Arab invasion. For the purposes of this essay, it has been satisfactorily shown that the Royal Library certainly did not exist by the time that the Arabs arrived and this, coupled with the silence on the subject of the near contemporary Christian chronicler John of Nikiou, should lead to a rejection of the Arab connection. It is perhaps possible that the story resulted from the loss of one of Alexandria’s other libraries during the Arab invasion as by no means all of them can be accounted for.

In the modern world, the Library of Alexandria has been used as a parable against tyranny and religion as Caesar, Islam or Christianity were blamed for its loss. It is portrayed as the repository of all ancient wisdom but for whose loss the Dark Ages might never have happened and science could have progressed much more smoothly and quickly. The truth is more satisfying for being more reasonable. The Royal Library was an important institution in the history of literature but its destruction in the first century BC did not spell the end of ancient scholarship and Alexandria remained the Mediterranean’s intellectual capital for seven centuries afterwards. One of the reasons it could do so was the foundation of other libraries like that in the Serapeum and the desire of the Roman Emperors to patronise the city. At last, the Arab invasion ended the story and our inheritance from the ancient world had to be preserved in Constantinople and Baghdad.

Finally, the story comes from the hand of a Christian intellectual who would have been more than happy to show the religion of his rulers in a bad light. Agreeing with Gibbon this time, we can dismiss it as a legend.

SOURCE
1.) The Mysterious Fate of the Great Library of Alexandria by James Hannam

2.) The Foundation and Loss of the Royal and Serapeum Libraries of Alexandria by James Hannam