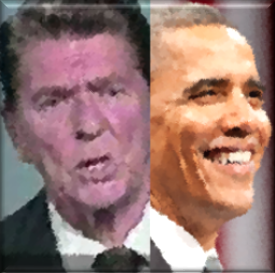 Muhammad Rasheed -  1.) It was under the Reagan Administration when America's manufacturing jobs first started being sent to other countries. The first massive wave of layoffs that started the trend of collapsing our middle class happened under his watch.

2.) It was Reagan's Vice President, George H. W. Bush who built NAFTA during his own presidency, which would have Mexico do all the American manufacturing at our middle class' expense. Bush wasn't able to get NAFTA to pass during his term as he had hoped, so instead he tricked a green President Elect Bill Clinton into doing it for him.

3.) The very pro-middle class President Obama was determined to amend NAFTA with his TPP agreement, building a new relationship with the Asian world to offset, and even overrun, the problems NAFTA created.

Because of these three items alone, it's pretty clear that anyone who claims Reagan was the best president and Obama was the worst, is actually an enemy of the United States of America.

Marc Keelan-Bishop - While I agree that we should vilify NAFTA and the Republicans, TPP is just as bad if not worse than NAFTA.

Michael Daniels - Is this intentionally meant as comedy?

Muhammad Rasheed - I can't wait for you and Marc to actually counter this post with facts, so the real discussion can begin.

Michael Daniels - I have no facts to counter your comedy . I don't even disagree with your assertion that Ronald Reagan was not the best president and Obama was not the worst president. I just find your jumble of chop logic and biased personal opinions incredibly amusing.

Muhammad Rasheed - I think my own biased personal opinion expressed in my final line have a lot more support than the "Poll Finds Obama the Worst President Ever!" I originally wrote this in response to.

The American manufacturing jobs being sent overseas, causing the first wave of massive layoffs in are big cities happening under Reagan's watch, as well as the origins, content and effects of NAFTA are all of public record. That Obama has also championed the middle class as a Moderate is also a matter of public record.

Which part do you find the funniest?

Marc Keelan-Bishop - First, TPP provides even more preferential access to the American market than before. For example, under NAFTA, 62.5% of a car sold in the US without duty must be sourced within the NAFTA countries. Under TPP it'll be 42.5%

TPP allows more access to foreign markets, but mostly for multinationals like Apple which keep most of their international profits in foreign banks, safe from the American taxpayer.

Marc Keelan-Bishop - I'm curious, Muhammad, what do you think TPP will do to help America?

Muhammad Rasheed - The TTP will enable technologists to come from the participating Asian countries to setup manufacturing centers in America. The fruit of Obama's educational reform, and college loan reform, the 100,000 technology jobs he championed will enable the next generations to take advantage of these new opportunities to help build up the middle class.

Access to foreign markets is a win for everyone. That's something that everyone will be able to take advantage of. It's a good thing.

Since this was a compromise effort between the 2 parties, I would reasonable expect there to be items in it that would make me frown. But to think the whole thing is garbage... like NAFTA was... isn't reasonable, since Obama wasn't that kind of guy.

Marc Keelan-Bishop - Why would any Asian technologists want to open a manufacturing Center in America where it's much more expensive?

Marc Keelan-Bishop - We'll see. Seems like the Asian countries got a lot more than the US and Canada.

Muhammad Rasheed - It'll be okay. We won't see the full benefits of it until the education/college loan reform and pro-science/tech measures start bearing fruit further up the road. Obama's was a long-term strategy to build up America and make her competitive again.

Marc Keelan-Bishop - TPP worsens aspects of other free trade agreements, which allow foreign corporations to sue a government for lost potential revenue of a law interferes with their business plans. It's a corporate rights bill.

Muhammad Rasheed -Nothing was worse than NAFTA. With the TPP efforts to amend NAFTA, naturally the people who most benefited from it would still insist they get SOMETHING. With a compromise bill this is to be expected. Either both parties get something, or nothing gets done at all.

See Also:  Obama's Game: Secrets of the Trans Pacific Partnership
Posted by M. Rasheed at 10:25 AM